"Do not go gentle into that good night... Rage, rage against the dying of the light." So said Dylan Thomas. And Ford, who recently used a voiceover reciting the famous Dylan poem to contrast the thrills of driving a Ford Mustang with the frustrations of daily life (photocopier jams, train commuting mishaps, unbearable workloads).

In response to an ASA investigation, Ford said that they believed that by the end of the ads, viewers were left to imagine how they would feel driving the car instead of experiencing the daily grind of office life.

The ASA said in its ruling this week that "the ads suggested that driving was a way of releasing anger, which put the driver, other motorists and pedestrians at risk. As such, we concluded that the ads encouraged unsafe driving and breached the CAP Code".

It's probably fair to say that "rage" is likely a complaint-triggering word that car ads should avoid. Or they should at least avoid exhorting drivers to rage, poetic merit notwithstanding.

Ford shouldn't feel too bad though. This is a perennial issue for car ads. This week alone the ASA have ruled against three car ads for encouraging unsafe driving.

The other car brands on the ASA naughty step this week are Fiat Chrysler and Nissan.

The Fiat Chrysler ad showed four cars racing on roads in urban settings, including a series of elevated, tilting and intertwining roads running between high rise buildings, intended to evoke Hot Wheels-style toy car tracks. A voiceover stated "Your childhood hobbies are back" and "Let's play again". There was a prominent disclaimer on-screen informing viewers that the ad showed professional drivers on a closed course and exhorting them not to attempt to replicate the scenes. It was not enough to save the ad. The ASA considered that speed was the main message of the ad, and that it portrayed the cars racing and being driven in a manner that condoned or encouraged unsafe or irresponsible driving, that could be emulated.

The Nissan ad was said to have encouraged dangerous driving by exaggerating its safety features (a driver in a rush to the airport relied on the Intelligent Emergency Braking feature to avoid running down a pedestrian) and by implying that the vehicle was being driven at excessive speeds as the driver veered off a motorway to avoid queuing traffic.

So, car advertisers, by all means give us more poetry. But avoid anything that might be construed or misconstrued as condoning rage, play or driver errors.

Image credit: J Mayner (from one of my favourite coffee shops). 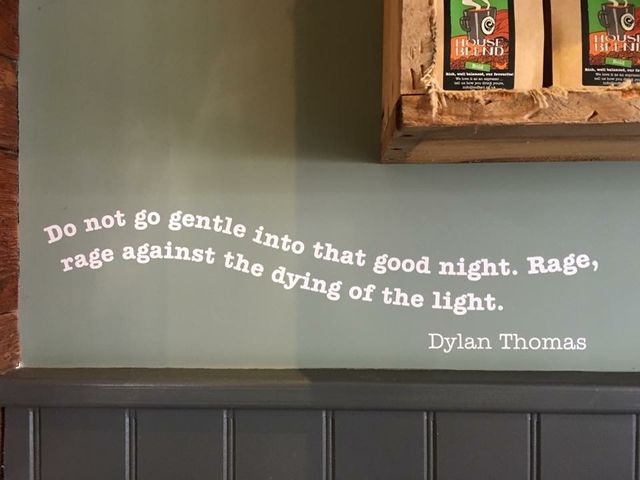 is there no end to this nannying...!?

This dumb, nannying decision from @ASA_UK makes me angry. I shall relieve that anger by driving my #Mustang in an unsafe way later on today, because I always model my life on adverts.https://t.co/CRXKYVQmTx

When your living room becomes a classroom.......
Frank Suttie

Immigration Health Surcharge to increase to £624 per year
Emma Brooksbank