Seemingly on a roll following a string of successful campaigns (click here for a quick read on earlier efforts), the advertising team at KFC struck again in March this year with the launch of its new UK-wide “Chicken Town” campaign.

The lead TV spot sees Colonel Sanders driving around neon-lit American streets, passing countless KFC imitators while people huddled in and around the dingy shop fronts stare in wonder or reverence as the Colonel’s fine car passes by. Audio comes in the form of the love theme from The Godfather and a gravelly voice-over musing “Welcome to Chicken Town. Welcome to the Wild West. Home of the imitators. Because when you’re on top, everyone wants a piece of you. Well, good luck to them, I guess. Let them have something to aim for. Word to the wise. There’s only one Colonel in Chicken Town.” The final scenes see a clean and well-lit real KFC branch with chicken being freshly breaded in a spotless kitchen and a Nighthawks-esque view of diners in the restaurant, before the Colonel’s car passes on into the night.

The campaign also includes supporting print and out of home creative which shows the shopfronts of imitators, from AFC to ZFC, lined up above the words: “Guys, we’re flattered.”

It’s bold and deft. That said, some intellectual property lawyers might wring their hands over the approach. Is it wise to openly acknowledge the proliferation of imitators against whom you might prima facie have a trade mark infringement case without being seen to take action? (Not often.) Might it hurt your case to impliedly acknowledge the descriptive nature of your branding and/or the prospect of at least partial genericisation? (It could.) Might it legitimise the competition and/or embolden others to join in, or do worse, if they think that you will see the funny side and let it slide? (Perhaps.)

No doubt KFC carries out ongoing trade mark enforcement action, at least against the worst offenders – notably, there is no imitator shown using the KFC acronym. But there is a tacit (and refreshing) acknowledgement in this campaign that imitators may not always be that much of a commercial threat and that, with humour and a light touch, they can even be used to remind people that your brand is the real thing.

It takes a massive brand and a lot of confidence to pull this off. From the outside it looks like a super-brand in its prime that has outgrown playing whack-a-mole with low-quality high street knock-offs. Whatever its lawyers do behind the scenes to clamp down on imitations that cross a line, the public message is that KFC is untouchable, unconcerned and secure in the quality of its offering and its position at the top of the tree.

And yet, The Godfather seems a strange reference point. One of the recurring ideas in Francis Ford Coppola’s trilogy of films is that the Godfather’s position at the top is rarely secure and the games of cat and mouse, cross and double-cross (and worse) never stop. No doubt KFC top-brass are well-aware.

In the first Godfather film, Don Corleone tells his new consigliere that “a lawyer with his briefcase can steal more than a hundred men with guns.” At the moment the KFC philosophy seems to be that a marketing team with a sense of humour can do more for the brand than an army of trade mark lawyers. That’s probably fair. But I doubt it means that KFC’s lawyers have whacked their last imitator.

Meghan Farren, Chief Marketing Officer at KFC UK & Ireland, said: “It’s flattering to have this entire legion of imitators, and we wish every chicken shop out there the best of luck. But there’s nowhere else you can get the Colonel’s Original Recipe. We invest time, effort and skill into freshly hand-breading Kentucky Fried Chicken in our kitchens - all day, every day - and that’s why you can only get KFC at KFC.” Hermeti Balarin, Partner at Mother added: “There’s only one colonel in Chicken Town. And his name is Harland Sanders. Capice?” 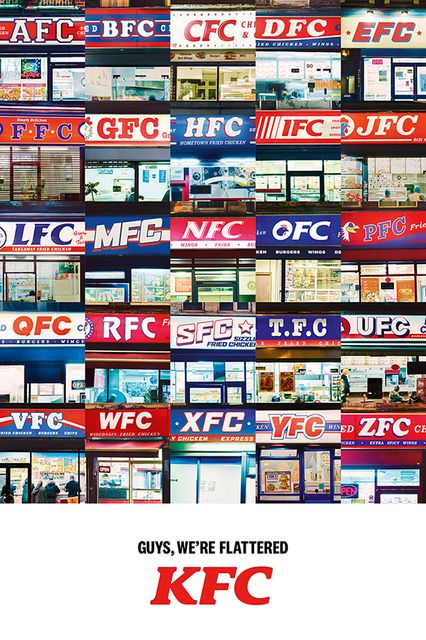 KFC: all these small-fry places are copying our thing.

Bad lawyer: put us on retainer & we’ll send cease and desist letters to them all.

Good lawyer: it’s whack-a-mole and no-one likes a bully. We’ll help you with any really bad ones.

Marketing team: we have a cunning plan. pic.twitter.com/xfgxn26ucv